(Yes, I'm backdating this post.  I forgot to write it when it was sunny and now Summer is apparently over again, so I'm trying to recreate that summery feeling without being all depressed about the current constant drizzle.  As you can see, I'm failing.)

Summer came in with a bang this week, and we capitalised on it with 4 glorious days spent trying not to burn  and trying to encourage Jacob that water is not the work of the devil, and is actually quite fun to play in (on the plus side, we found a suncream that Jacob is not allergic too!  Nivea Kids, factor 30, for those keeping track).

On Thursday, we went with my dear friend Rhian and her daughter Poppy to a park close to her home.  And blimey, do they keep this one secret.  From the road, it just looks like a nice bit of grass and an old house.  Once you get in, tucked away out of sight of the road there are shady walks, a duckpond, tennis courts and a fantastic playground complete with sandpit (I'm always jealous of there being sandpits in parks in America, I've never come across one here before). 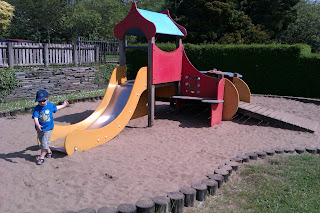 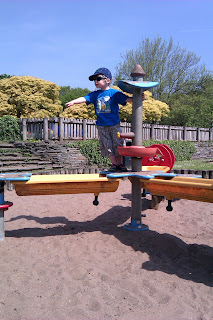 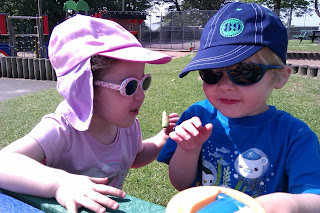 When we got home, I spent bloody ages blowing up a paddling pool (I couldn't get the pump to work), only to find a small rip in the base.  So I found another paddling pool, spent bloody ages blowing that one up, then just as I finished I found the repair kit for the first one.  Still, Jacob had a whale of a time filling it, and now we have a spare ready blown up in the garage, in case of a paddling emergency. 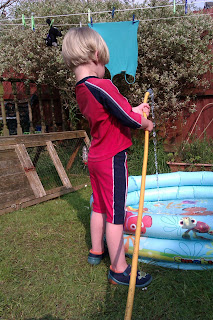 (There are no more photos of Jacob actually playing in the paddling pool, because as Jamie delightfully put it, Jacob put the 'poo' into 'paddling pool')

On Friday, we went with my friend Hannah and 18-month-old Finn to the beach.  Jacob entertained us in the car by translating Finn's squeaks and screeches all the way: "Finn says he saw a little bird!"/"Finn says he loves the beach", which was just too lovely for words.  As we approached the beach, we could see that the sea was swathed in mist, and the temperature was about 5 degrees lower than on the top of Gower.  A welcome relief, although it didn't last long and we had to retire not long after lunch, before the littlies spontaneously combusted (not me though, I swam in the sea.  Yes I did.  And came face-to-face with a fucking huge fish.  Never again). 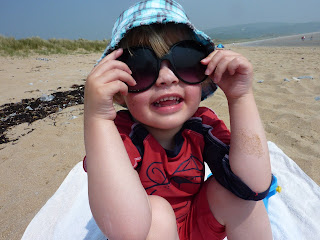 See little Jacob's front tooth?  He knocked that bit out at nursery.  They neglected to tell me.  I was not impressed. 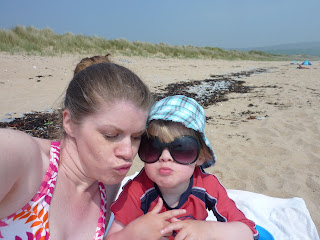 Jacob and I, perfecting our ANTM poses.

On Saturday, we went to the beach (a different one) with Jamie.  We became proper grown-ups by buying a windbreak and throwing passive-aggressive dirty looks at the group of teenagers who set up camp 6 inches away from us and began swearing and playing their iPods through tinpot speakers.  Have they never heard of headphones? 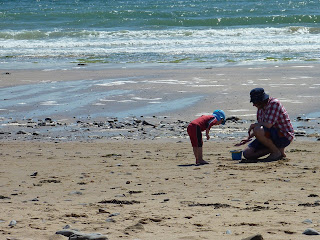 We spent hours climbing over these rocks, looking for crabs in the rockpools.  We found lots.  I discovered that the dye on the bottom of my flipflops has a tendency to leach into the skin when they become wet, but once transferred, it sets up camp and refuses to move.  Yes, I now look like I never wash my feet. 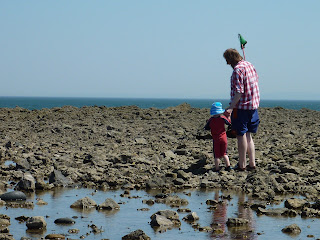 We spent Sunday at home, playing in the garden and clearing up the deck to make it a nice play area for Jacob.  I took before photos but forgot the after ones, so you'll have to wait until another day for those.

It was a freaking awesome four days, dirty-feet and pooey-paddling pools aside ;)
Posted by Beth at 6:46 PM 2 comments: 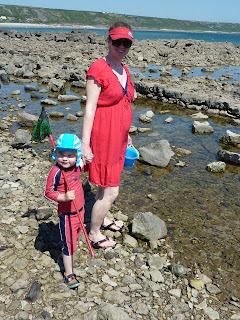 Sticking it out slightly, but getting quite bumpalicious, nonetheless :D
Posted by Beth at 7:46 PM 2 comments: 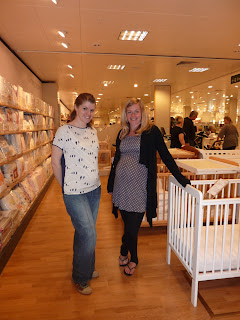 I went for a potentially-final visit with my sister yesterday, it's unlikely I'll see her again before she pops.  She looks amazing for 37 weeks, a very neat bump and very active, although she can't fit her feet into shoes any more.

Over the last couple of weeks, Jacob has developed a burning passion for Science.  I'm struggling to recall exactly how it came about, but each and every day I have around twenty-billion requests of "Can we do some more Science please Mummy?".

So far, we've done lots of bubble blowing (experimenting with different-sized and shaped wands), colour mixing, gravity (with a slinky on the stairs - didn't really work as the slinky was a cheap plastic one.  The real ones are surprisingly pricey) and water (pouring and measuring and bubbles and more pouring and splashing and pouring).  We also have 'science baths', where we hypothesise what kind of objects will sink or float, and then try them out.  Again and again and again.

I've been researching science materials and activities online, and it seems pretty much anything with an element of discovery can fall into this category for preschoolers.  There's a great resource of activities here at Productive Parenting, where you can choose your child's age and the learning category and get a list of activities from their library.  Pre-kinders has a load of great ideas and some printable materials.  I've started pinning some bits and bobs to my Preschool Science pinboard but haven't found much yet.

Of course, the best resource of all is the They Might Be Giants CD and DVD 'Here Comes Science'.  I could happily watch this all day.

Mostly, we're just having fun, and it's great having a focus to fill our days.  We try and get out for a nature walk in the woods that surround our house most days, where we can look at the weather, the seasons, learn about plants, and chuck stuff in the river to see if it floats or sinks (this is a very popular activity).  On Thursday, we set off into a slightly damp day, one of us sensibly bringing an umbrella along.  By the time we'd walked for 45 minutes and got a good couple of miles away from the house, the heavens opened and it POURED down.  Jacob looked down at my jeans, which were soaked from the knees down, and said "Mummy, I think we need to go to a waterproof shop and get you some waterproof trousers when we get home".  In his wellies and full waterproofs, he was happy to skip along in the ditches beside the path, splish-splash-splosh-splishing to his heart's content. 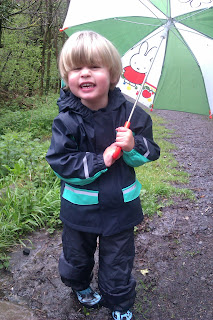 When we got home, we stripped off, wrapped ourselves in towels, and had some hot chocolate.  I've just found out that my over-the-road neighbour is going to be homeschooling her daughter.  Right now, I'm pretty jealous of them.  I could get used to this.
Posted by Beth at 10:53 AM No comments:

Around 4 years ago, I sat on this sofa (well, not this one, the old one), staring in disbelief at a stick I'd just peed all over.  Jamie wasn't going to be home from work for another 5 hours or so, I couldn't tell him by email or phone, and I couldn't, just couldn't, cope with this on my own for 5 hours.  So I rang my sister.  She knew how for the last 6.5 years, we'd been trying to have a baby, and how we'd pretty much given up and were looking into what our options for medical assistance were.  After a convoluted introduction, where I explained how I'd been feeling nauseous and sore, and how I'd been trying to calculate when I last had a period but couldn't (damn PCOS), I told her that I'd done the peeing, and there were 2 lines looking defiantly back at me, but I couldn't believe they were true.  She screamed, and cried, and came to her senses and talked me into going out to buying another (six) tests.  I returned home (after a hilarious encounter in the pharmacists, where the pregnancy tests were located on the shelf below the haemorrhoid creams, and two elderly women were very s l o w l y and LOUDLY deliberating the efficacy of each and every one; while I dithered behind them, muttering under my breath about needing to GET A DAMN PREGNANCY TEST NOW), peed on 6 more sticks, and ended up staring at 7 lots of glowing double lines.  Yep, no mistaking those.

Living 3 hours away from my beloved sister means that we don't get to spend as much time together as we'd like.  When I next saw her, I already had a little bump going on.  We took this photo of me with a real bump and her with a cushion stuffed up her dress, to commemorate the occasion. 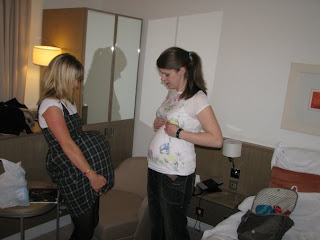 Fastforward 3 years, and sometime last year I had a phonecall from my sister.  "I need to talk to you," said she.  It transpired that she was on her own, her husband at work, and she'd done a bit of peeing-on-a-stick of her own.  But, presuming it to be negative, she'd forgotten to actually look at the stick, had merrily tossed it in the bin and gone about her day ... until she next went to relieve herself.  She found herself looking into the bin, where the discarded stick showed two unmistakable lines.  I screamed, I cried, I congratulated her.  And persuaded her to go out and buy some more tests, just to check.  She did, she peed: they were positive.

She's now got just a month left to go, and when I saw her just before Easter, we decided to recreate the above photo, in reverse. 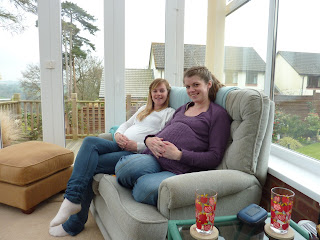 Just a couple of days after the above photo was taken, I was back home again, alone (well, as alone as you can be with a very noisy toddler running around), and making a necessary call to my sister.

"I need to have that conversation with you that we have with each other before we have with our husbands", I said.  After a beat of confused silence, she screamed "Are you fucking shitting me??!" (which, funnily enough, were the exact words my husband would say a few hours later).

It turns out that in the above photo, I didn't need a cushion at all. 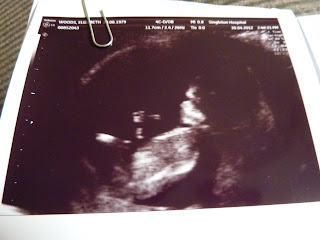