A year ago, I was basking in the loveliness of newborn snuggles. Today, it's all about the girl who can never get enough cuddles, who is so loving and kind, who adores her big brother and barely ever stops smiling.

To the happiest baby in the world: I love you, and happy birthday ;) 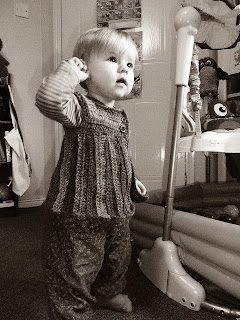 Pre-birthday celebrations with her cousin 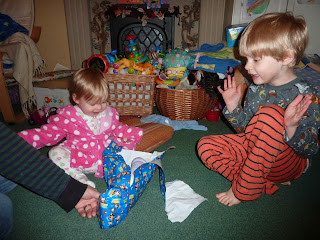 Jacob helping her open the present he chose and wrapped himself 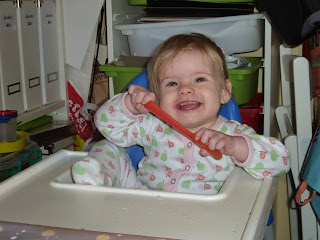 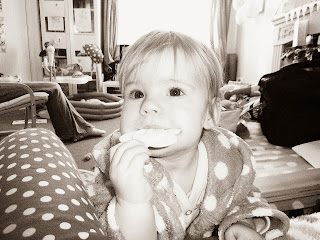 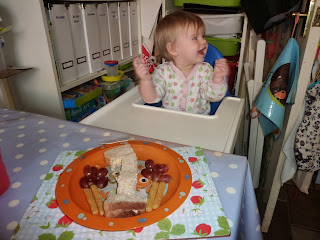 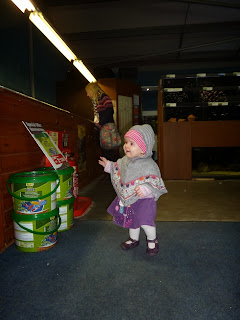 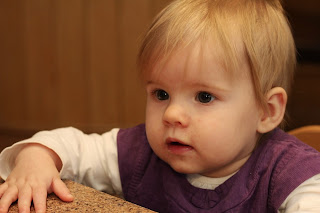 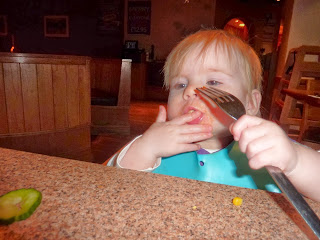 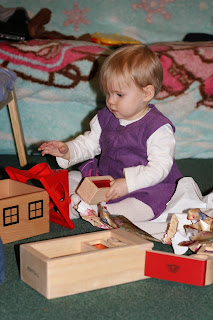 Opening presents before bed (such a drawn-out day! We had to accommodate Jacob being in school...) 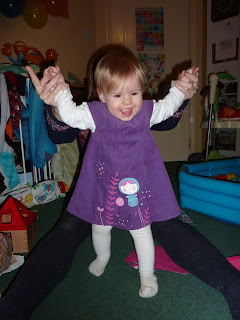 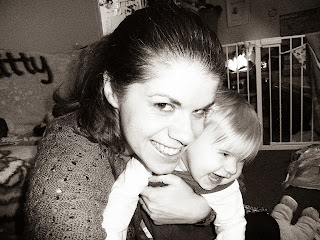 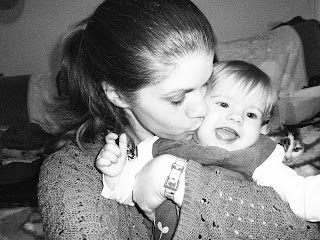 It's snowing again, and insomnia is rife. I've got so many blog posts to catch up on, so I thought I'd do one now without thinking, to give me the impetus to do more tomorrow.

Yesterday (or the day before, as it's after midnight now), Josie had an epic sick whilst playing on her playmate. Playmat! DYAC. Excellent parents that we are, we didn't notice until it had nicely pooled round the back of her head and in her hair.

I gave her a lovely hair wash in a little bowl, which left her with a delicious cloud of silky hair (Silky the fairy from Enid Blyton's Faraway Tree stories? That's my girl). I lay her down for some tummy time, and she immediately started snogging the towel she was lying on. Being too lazy to get up, I fed her there on the floor, and she fell asleep in perhaps the most gorgeous pose ever. Naked and beautiful and soft and warm. I covered her with a blanket and snuck away for 5 minutes of peace.

She doesn't sleep much, and I can't get enough of her when she does ;) 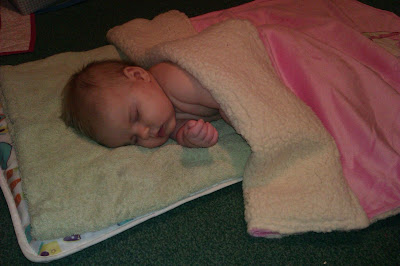 A Series of Unexpected Events

Really, this post isn't going to be as exciting as it sounds.  We haven't been on any unexpected adventures today - the furthest I went was to school to pick Jacob up and back.  Even then, I didn't get out the car; instead I stayed in the warm with girlface while Jamie went to pick up boyface.

It just occurred to me that with her ladyship turning 7 weeks old tomorrow, a lot of things haven't exactly gone as planned, but they've ended up pretty awesome, regardless. 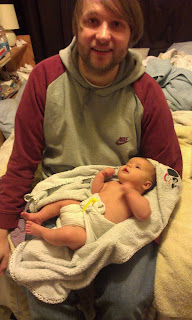 Check out the adoring gaze and the makeshift nappy.

*Really though, we're done**.
**But you can never expect the unexpected.

In gentle exercise news, I decluttered the lounge and put away the new Christmas toys/crap.  It was quite labour intensive, so that'll do me.
Posted by Beth at 10:33 PM 2 comments:

Watching Got to Dance with a snoozing baby on my chest counts, right?

Two trips to the doctor's today, and I've officially been prescribed a course of 'taking it easy'.

So I'll be chilling on the exercise front for a little while, but still trying to post every day, because I'm enjoying it and the momentum is here.

I've also just learnt that Ashley Banjo is only 24, which makes me feel:

a) old
b) inappropriate
c) like I'm unlikely to be invited to join Diversity. 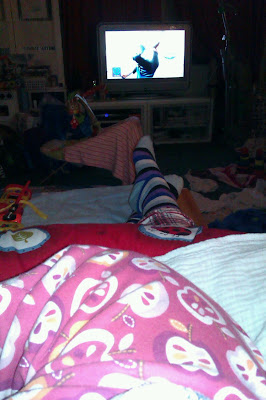 While we watched the retro children's weekend on CITV today (Super Gran!), we finally took all the Christmas decorations down.  Everything looks very bare now (not bare by normal people's standards, obviously, there's still two layers of furniture round the walls) and it all seems to have gone by too quickly.  Jacob was none too impressed by our retro viewing - he evidently has more sophisticated tastes than we do did (and when we were quite old too, a lot of this stuff was from the early nineties).  We managed to avoid Peppa Pig long enough to watch:

A while ago, we found a load of Puddle Lane books in a charity shop and bought about 10 as I remembered them from my childhood and was feeling all nostalgic.  Jacob loved them, read them over and over, and insisted we carried a few with us wherever we went.  A couple of week's later, we found hundreds more at a Scout Fete and I bought as many as I could carry.  They're still firm favourites, and it was the only time today that he paid any attention to what we were watching.  The opening sequence started, and he said incredulously, "I think this is my Puddle Lane books on the telly!  What's it doing on the telly?" and was very excited to see Toby Spelldragon ("What's Toby doing there!") but wasn't too keen on the magician.

The rest of the time we were de-decorating and watching, he heartbreakingly took the opportunity to draw the following picture.  I don't know how well you can make it out, but he wrote "No More Christmas" (or No=MCisMs, as he puts it) above a picture of a Christmas tree.  He wasn't sad about it, just very matter of fact.  He was mostly excited by the present he found concealed amongst the branches which my Mum had hidden last time she was here - a tradition from my childhood of a present from the 'tree fairy' to be opened when the tree is taken down.  It was a knock-off Schleich penguin which he loved and played crazy flying games with until dinner time. 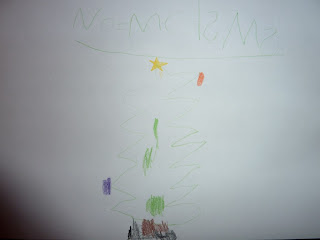 In other news, my body has decided that I am officially Doing Too Much and it doesn't want to do quite as much, thank you very much (I'll leave the details to your imagination, delicate flower that I am), so the only exercise I got today was undecorating and sleeping.  And feeding.  And dancing to the Super Gran theme tune.  Seriously, Super Gran.  Youtube it. 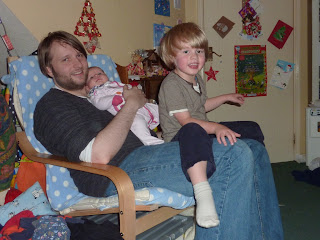 Happy Christmas.
Posted by Beth at 11:45 PM No comments:

We meant to go out for a walk today, but we didn't get back from Tesco until mid-afternoon (Jamie works Saturday mornings) and it would have been dark by 4.30 and I needed a cup of coffee.  And we hadn't had lunch.  Then we were going to go for a night-time walk with Jacob's torch (£3 torch = hands down best Christmas present.  He would have been happy with this and only this.), but he spent 2 hours eating his dinner so that was out too. 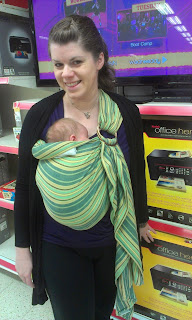 Tescoing, and slinging, that's at least a little bit of exercise right there, yes?

And now it's nearly 10pm, and Jamie has gone for a run (oooh, get him), and I'm sitting here trying hard not to think about the apple crumble shortbread in the kitchen.

I'm not feeling guilty about it, I'm going to watch one of my guilty pleasures instead: Girls of the Playboy Mansion.  Feeding a baby night and day (a baby who can't be fed in bed due to aforementioned projectile vomiting issues - I'm not going to be scrubbing milk out of my mattress every day) means watching a whole lot of telly (well it does for me, I'm sure I could do something more useful with my time, but I'm not going to).  I've learnt when all the good stuff is on, and persuaded Jacob that feeding = Mummy's turn with the remote.  And whilst I like all kinds of serious, funny, good and clever telly shows, I also like to watch a whole lot of crap.  In no particular order, my recent (guilty) delights include:


I've watched GOTPM (there's a clunky acronym, if there ever was one) for years, and whilst it should be the type of thing I utterly abhor, I've fallen in love with Holly, Kendra and Bridget and feel fully invested in their lives.  The last episode was on the other night and now it's started again from the beginning, and I'm enjoying it just as much.  I'm not going to apologise for this ;)

Hawaii Five-O is a recent addition to the list, which my sister-in-law introduced me to just after Josie was born.  It's been repeated in the mornings while Jacob is at school, and it's great.  It's funny, and cheesy, and fast-paced, and neatly wrapped up in 42 minutes.  I love it.

So not exactly top-notch viewing, but they all make me happy, and I'd rather watch one of them than something that requires concentrating and paying-attention-to, which might be difficult when I get distracted thinking how utterly delicious my daughter's cheeks are or look down to see her smiling up at me. 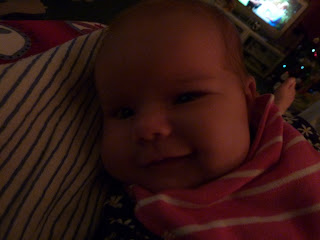 Guilty pleasures are far more pleasurable than normal stuff.  Which is why I'd rather read a pony book that I've read a thousand times since I was nine, instead of one of the books I got given for Christmas.  I'll get round to them in due course, but right now I'm reading "I wanted a pony" and I'm enjoying the hell out of it.

And I won't mention that Jamie, despite his intellectual, bookish, oooh-look-at-me-I-got-a-First persona, enjoys, and even records, Jeremy Kyle.  I therefore think I win.
Posted by Beth at 10:01 PM 7 comments:

The view from my chair

Testing mobile Blogger app. Any excuse for a photo of my girl ;) 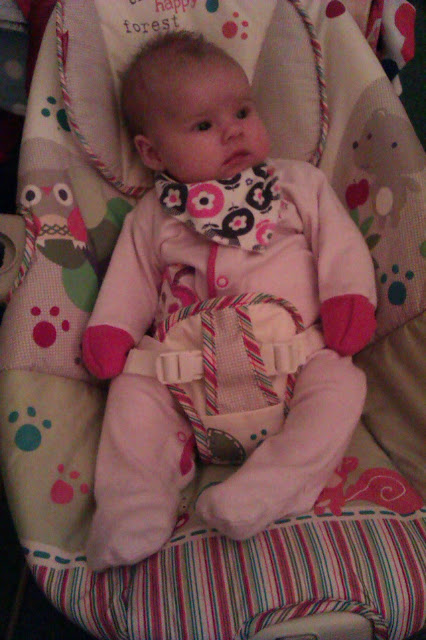