My Name Is Beth, and I'm a thumbsucker

Yep, at 31 years old I'm not too proud to admit that I still suck my thumb. Admittedly, it's not very often now, and I can't actually go to sleep sucking my thumb any more, as I've trained myself out of it. But all through my childhood, teens and early-twenties it was very necessary, and very hard not to do it when society dictated it to be inappropriate.

I remember sitting on the sofa after school watching television and sucking my thumb, and quickly whipping it out when the local paper was delivered by one of my classmates, who would walk past the front window and nearly always catch me in the act. Going to sleepovers was horrible, because I couldn't get to sleep without it, but didn't want my friends to see. And as for when I grew up a bit and started having sleepovers of an entirely different nature....... well I suppose that's when I really started trying to kick the habit.

As a result, I was adamant in my pre-baby days that I would not let any child of mine suck their thumb or fingers; that it would be far easier to get rid of a dummy than it would be to stop them sucking an always-available thumb. When I became pregnant, I reluctantly bought some dummies, which seemed very alien to me. I was already leaning towards the natural-parenting school of thought, which is most definitely dummy-free, and as neither myself nor my sister had had a dummy I couldn't quite get my head around the thought of using a piece of silicone to pacify my baby. I'd also read about nipple confusion, and knew I should wait 4-6 weeks, until breastfeeding was established, before introducing a dummy.
Then motherhood hit, and I had this hungry little baby, who couldn't or wouldn't latch on to feed, and who had to be fed with syringe or cup for the first 6 days of his life, before a kind community midwife saved my sanity by suggesting nipple shields, which worked like a charm and he started feeding straight away. The times when he wasn't feeding, he was grizzly, and grumpy, and moaned and groaned in his sleep and kept us awake at those times when we needed to try and catch up on our sleep. We told the midwife, who asked if we'd considered a dummy. I mentioned about the nipple confusion but she said that as we were using nipple shields anyway it wouldn't make much difference.
I think I sterilised the dummies ready straight away, but it was about another week before I could bring myself to give him one. I'd also read research from the Foundation for the Study of Infant Deaths (FSID) that dummies reduce the risk of cot death, but also once you've introduced one, you shouldn't take it away until after a year old (I can't find that to link to now...).
So we became dummy users, and had a brief conversation at around a year old about whether we should 'do something' about it. We started reducing his use of it, so that he only had it in the car and in the cot. And that was, on the whole, pretty successful (we didn't implement this at nursery, as I figured he needed all the comfort he could get while he was there). Especially when toddler life became exciting and he started trying to talk a lot more, which was easier with a mouth unencumbered by a lump of silicone. Of course we had slip ups - when he was poorly then it's the only thing he really wants (and a Jemaine in each hand), when he's anxious or nervous or scared, and when he's poorly. When he dropped his afternoon nap he started getting tired around 6pm, so we instigated a half-hour In The Night Garden-Jemaines-dummy-Dorothy rocking session.
Recently we've had this horrible illness, and he's spent pretty much all day every day rocking on Dorothy with a dummy in his mouth and a Jemaine in each hand. And that means the dummy encroaches into other parts of life, so we end up exhausted at soft-play with a dummy... 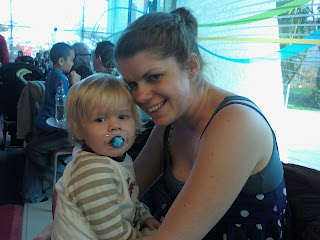 And potentially lovely photos are spoiled by having it right there. However much I'm used to it now, I still don't like seeing it. And he knows it too, if he stumbles across one and slips it in, he'll come running straight up to me, thrust his face in mine and point to it with a cheeky grin. "Jacob, have you got a dummy?" I ask in a teasing tone of voice, and he screams and runs away cackling, to 'hide' in a corner and suck it for all he's worth.
All of this wittering is a roundabout way of saying yes, he still has a dummy, and no, I don't really know what to do about it. I think I'd rather wait until he can understand before we take it away completely. There's nothing I hate more than seeing him upset or hurting and not being able to explain what's going on and to help him. If we were to take them away now, he'd be inconsolable. I know it would probably only last a few days, then he'd forget all about them, but I just can't see that it's doing that much harm. Illness aside, he only has it in the cot now, and I'll often go up to check on him and find him sleeping without it. Sucking has been shown to alleviate pain, and it's definitely an innate instinct to suckle for comfort. In an ideal world, he'd be suckling on the breast, but for us that wasn't possible (3 months of thrush and recurring mastitis meant feeding him was hard enough, let alone any extra-curricular suckling).
Really, I just can't resist the cheeky twinkle in his eye when he's got one. It's gorgeous.
Posted by Beth at 7:39 PM

So what? Our LO's aren't even two yet, that still classes as babies I reckon. We're in exactly the same position with P - only cot, car or extended pram sessions around shops - and happy with that. It's such a confusing time for them, living their lives in the big world where new things happen all the time. Any comfort she needs is fine by me, especially when ill. Until she can understand that the dummy fairy needs her dummies for the new babies or Father Christmas is taking them for new babies and she's getting lots of presents in exchange, her dummy is going nowhere.
But the odd photo that slips through the net avec dummy does hugely annoy me ;-)

I think we'll be going the dummy fairy/new baby route too, I just can't envisage taking it away from him now and not being able to explain why. We just had a 2 hour fight about it - he wanted to stay up and have his dummy, I confined the dummy to the cot. I just feel confused that I don't know if I'm doing the right thing or not (by limiting it), or whether he should be having it whenever he wants. Having read back my post, I don't think I got that point across at all!
What will be will be, there's more important things to worry about ;)