Tuesday, June 5th
With my sister Cate's due date being yesterday, and me just getting over my usual half-term fluey thing, I had planned to drive down to Devon with Jacob today, so I could spend a few days with her, going to see What to Expect When You're Expecting and doing other such pregnant-sister delights.

All of that was scuppered, when my alarm went off at 6am this morning and I saw a text from my sister at 2am, saying "Off to the hospital, will keep you posted...".  At 6.30am, the landline rang and it showed my sister's mobile number - I answered, expecting her to say it was another false alarm and they were back home.  Instead, her lovely voice said "I had a baby!".

She had arrived at the hospital to find herself already at 9.5cm dilated (really, I thought that kind of thing only happened in sitcoms), jumped in the birthing pool, and squeezed out a baby a few short hours later (I'm sure it was more difficult that I'm explaining; it's just that in comparison with my 32.5 hour labour, episiotomy and 2nd degree tear, I'm just slightly jealous).

So before 6 hours had passed, I'd driven 200 miles (Jacob stayed dry for the whole journey!), settled in to my parents' house, and dashed off to the hospital for some newborn cuddles.  And ahhh, cuddle we did ;) 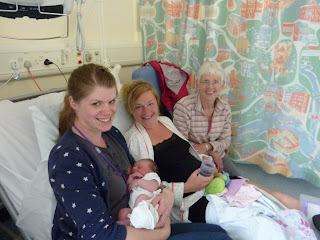 Wednesday, June 6th
On day 2, Jacob got to meet his cousin (he wasn't allowed into the hospital as he wasn't a sibling) and was very taken with her.  When he woke up that morning, I told him "I've got some very exciting news.  Auntie Catey's baby came out of her tummy!" Jacob was very excited and said "I've got some exciting news too Mummy.  I love you!".  Bless him ;) 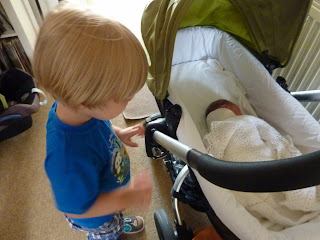 Jacob meeting his cousin, a little apprehensively, but unfortunately not allowed more time to get to know her due to my Dad refusing to let him settle and get used to her :/

Thursday, June 7th
On Day 3, I spent a few hours reassuring my sister about breastfeeding, having lots of chats, and getting her out of the house for a walk.  And being SO excited about getting to have a newborn of my own before the year is out! 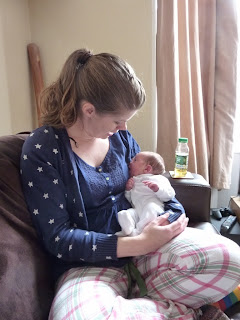 Anouk, mistaking me for her Mama ;) 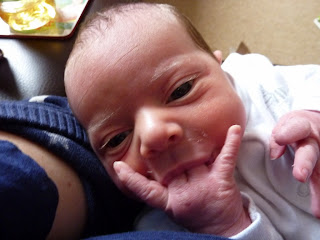 She looked so happy when her frantic flailing resulted in the right two fingers getting in there. 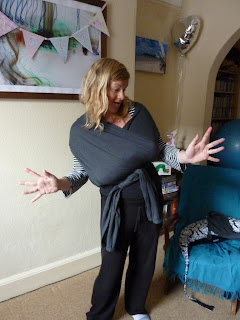 Catey doing the International sign for babywearing - jazz hands.  I helped her get set up using her Close sling, and here Anouk is latched on and feeding, where she stayed during our shopping trip/walk.

Friday, June 8th
We stayed for 4 days then sadly had to make our way home.  Jacob coped admirably with all the change, and carried on using the potty/toilet perfectly, with only one accident when my Dad took him away without seeing if he needed the potty first (and then not telling me that he'd had an accident until all opportunity for changing him had passed), enough said.  We slept in the same bedroom (Jamie couldn't get time off work so wasn't with us), with Jacob on a mattress on the floor and me in the big bed.  He kept waking in the night and saying "Mummy, are you there?" which was the loveliest thing in the world.  He doesn't half make a lot of noise in the night, though!  Lots of sleepless nights resulted for me, especially as I began to feel proper kicks inside, which were properly keeping me awake ;) 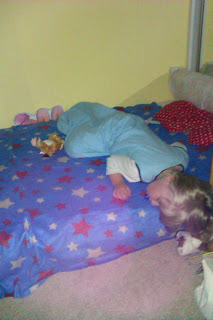 I took this photo in the pitch-black middle-of-the-night, you can't quite tell but he was lying completely sideways on his bed, with his head hanging off.

Aww Beth what a lovely post and what a great sister you are. I am so excited for you to be having a newborn before the year is out too. In the meantime though welcome to the world baby Anouk.