Allowing Jacob to potty train in his own time seems to have worked.  It's 4 weeks since we started potty training, and without really noticing, we were done about 2 or 3 weeks ago.  We haven't tried to push night-time dryness, as we figure that will also come in its own time, but right from the start he probably had 2 or 3 dry nights a week.  We haven't added it as a target yet, we're quite happy to work on one thing at once.  And that one thing really hasn't been too much of a bind.  He seems to have a bladder worthy of a superhero - as on at least 3 occasions he's gone an entire day at nursery without needing a wee (this is not withholding, he genuinely doesn't need to go.  He'll often be back at home for an hour or two before he finally goes, and even then he doesn't produce a huge amount).  This makes me a lot more confident being out and about, so we ditched the pull-ups before he'd been through a single pack of them, and we're rocking the pants now.

All of this means that we're now frantically scrambling to get him into Meithrin (nursery/pre-school/the class that 3 year olds attend for a half-day every day before they start full-time school the September after they turn 4) ready for September.  We went to see our preferred school today, and it was Lovely.  We have our fingers tightly crossed for a place.

I'd like to add that this is not through any desire to get rid of him or to rush him into education - personally I'm of the keep-them-home-til-they're-about-7 school of thought.  Practically though, I'm going to have a newborn in November.  Having a couple of hours a day to focus on the baby might be kinda nice.  And whilst I'd love to homeschool, Jamie is not on board, I worry about my mental health, and the boy loves his day nursery and the friends he's gained there.  He can't continue at that particular day nursery (to the uninitiated, a day nursery is a private childcare facility where you shove your children while you go to work) because it's near my current place of work, and therefore far from my house.  This makes me (and him) sad.

This afternoon, for no real reason other than just having discovered that they do cheap afternoon sessions, I took the boy swimming.  It's been over a year since we last went.  It used to be a huge struggle, it's expensive, it was too much for us to face.  I'm not proud of the fact that we let it go so long, but always sometimes, it's just easier to take the ... easy road.

So I took him swimming, on my own.  After umpteen nervous trips to the toilet, we emptied our respective bladders, and took the (both literal and figurative) plunge.  He did not stop laughing the whole time we were in there.  He loved it.  He decided he could swim, and showing unbelievable abilities at mind over matter (I'm starting to believe this superhero thing might be closer to the truth than not), he pretty much could.  With a flotation vest, he kicked, he struck out with his hands, cupped and pulled himself through the water.  He made startling progress round the lazy river (as long as I had my hand under his tummy).  All in all, he was awesome.  We swam for 2 hours, and we're going back again tomorrow (capitalising on the confidence while we can!).

It just goes to show, that like the potty training, you leave them to do shit in their own time, and they do it.  Go on, pick holes in my logic.  Am I too passive?  Neglectful?  Denying him opportunities?  We could have kept on pushing the swimming when he was obviously uncomfortable, or we could have done what we did, and let him come to it in his own time.  Same with the pottying.  I'm so proud of him for both achievements and I'd do the same again, if I had the choice.

When we got home, he carefully spread the blanket out on the floor, and lined some shells up around the edge.  That took about an hour, and he told us that the blanket was a swimming pool and the shells were on the beach.  He lay on his stomach and 'swam' around his pool for a while. 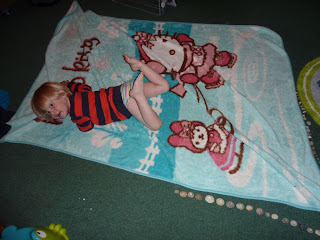 Then he climbed on the sofa, jumped onto the blanket and yelled "Splash!" :D 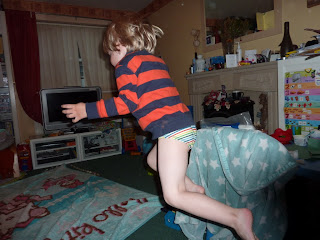 I could watch his imaginative play all day long. 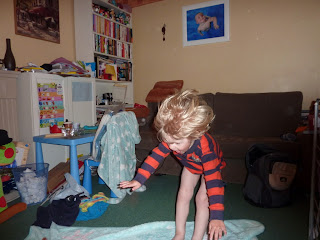 He's gone to bed and left me under strict instructions not to tidy his seaside up.  I wouldn't dream of it.
Posted by Beth at 10:18 PM

I'm such a comment stalker today, aren't I? It's just so nice to see you back in bloggyland!
Seems to me you're doing just the right thing, and proving beautifully that if left to his own timetable, he can do it, and without you having had any fights or power struggles or unnecessary stresses. If you can do it with BLW, you can do it with anything...