Somehow, we all seem to have contracted Norovirus over the last week.  I know my immune system was already low, having just had a nasty cold over the half-term break.  We had no inkling that anything was wrong with Jacob, however (apart from not wanting to eat much), until a scream at midnight last Wednesday brought us rushing into his bedroom, where he proceeded to vomit spectacularly everywhere.  After cleaning everything up, he slept fitfully all night, screaming, writhing with pain and throwing up every half-hour or so all night long.

A couple of days later, and I spent the day in bed, feeling too nauseous for words, but unable to do anything other than groan.  At midnight, sure enough, I was more sick than I've ever been in my life.  Repeat all night long.  Jamie was the last to succumb, waiting until Monday, at around midnight (it was like the witching hour for us!) he was dashing for the toilet.

Anyway, the upshot was that they didn't want me in school, and on Wednesday I was still feeling rough as anything, but in desperate need to get up and off the sofa, and into the fresh air.  Jacob wanted to go to the river, and as it was nearly lunchtime, we packed a picnic and left Jamie in peace for an hour. 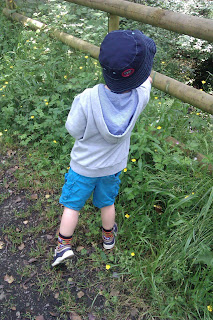 It's only a 10 minute walk through the woods to the river from our house, and I often forget that we have such a special place on our doorstep (it's slightly sullied by having a carpark attached, which is at the end of a short road which branches off from the local motorway service station, which boasts a McDonald's.  People 'in the know' buy their McD's, bring it down the track and park up to eat it and chuck their rubbish willy-nilly out of the window.  And you don't want to know what goes on there at night but it's well known as a local dogging hotspot.  I'm really selling this, aren't I?!).  For those properly in the know, you keep walking past the carpark, follow the river along its winding course, then put your picnic blanket on the banks of the river well out of sight of the carpark and earshot of the road.  Silence, except for birdsong and the rippling of the river. 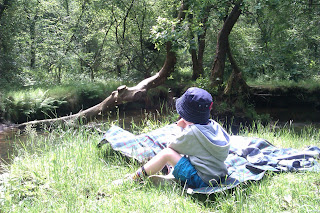 And when you've finished sitting in this patch of sunlight, feeling that everything is perfect in the world and your child is really an absolute delight and actually, your tummy doesn't hurt any more, you can lie back and watch your aforementioned child burn off some energy by exploring the clearing and playing king-of-the-castle on the concealed tree stumps in the long grass. 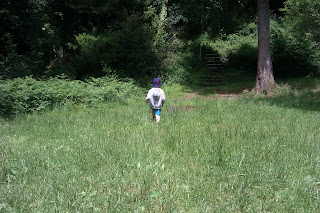 ...and then saunter back along the river path, seeing if stones or pinecones will float or sink in the river... 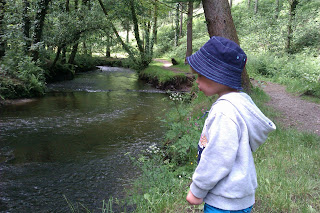 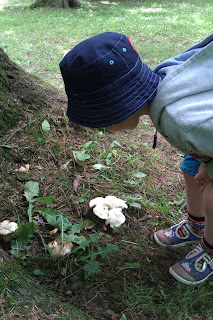 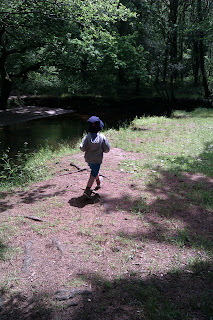 And even though it's only a 10 minute walk from the house, when you get home you'll remember that you're a) half-way through a pregnancy and b) just recovering from a serious stomach bug, and therefore spend the rest of the afternoon lying on the sofa.
Posted by Beth at 7:22 PM