J-cub's perambulatory abilities leapt ahead today, as he made a break from the lounge into the kitchen at top speed several times, and I exhausted myself running after him (obviously making "raaaaaaaah" noises to elicit shrieks of fear and delight). The kitchen has a hard stone tiled floor, which is not really ideal for a soft and delicate little baby head to be anywhere near. Plus there's the litter tray, and the cat food, and the cats come running in without wiping their feet etc etc.
So today's list item was really a no-brainer, and I got out our little box of baby proofing catches and the like, to sort out the nasty cleaning-cupboard-under-the-sink door. Luckily, the previous occupants of our house also had a small child, so most of the kitchen cupboards already have these catches. The one on the cupboard under the sink has broken though, and the pack I'd been given in a box of useful baby-stuff is a bit more secure, requiring one to pinch together the catch in order to open the door, rather than just giving it a good yank which is all the others require. 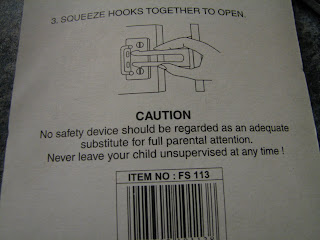 The instructions on the back of the pack handily remind you not to leave your child running loose in the kitchen, so we got out our travel stair-gate thing, which was the only way we could find to block off the kitchen without shutting the door and annoying the cats. I had wanted to put a permanent stair gate in the doorway, and was confused that I could not seem to do so without being unable to shut the door. I took a sneaky visit into my next-door neighbour's identical house to see how she'd managed it - turns out they've taken the kitchen door off its hinges and just have the gate there. They have a dog, so that probably works quite well for them, but cats can apparently jump quite high, so if we need to shut them in the kitchen for any reason, we really need a functioning door.
We were left with just the slightly-crappy option of the foldable travel stair-gate, which is a bit wobbly. We put it up, and let J-cub have a good go at it (we let the cats have a go first. They managed to surpass their previous levels of stupidity by repeatedly trying to push their faces through the mesh, until we built steps on either side to show them that they could actually jump it relatively easily.). He found it very amusing, and enjoyed alternately trying to peer over it, and pushing his face against the mesh (he does share a lot of similarities with those cats). 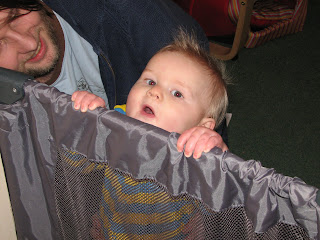 It didn't take him long to knock the gate down, after which we got out the instructions and put it up properly and securely. Like the good parents we are.
Day 28: Mission complete.
Posted by Beth at 10:53 PM

Just watched the video, ha ha, what a cutie! Made me smile :)