I went AWOL yesterday - a combination of exhaustion from wrangling a poorly baby; cabin fever; general malaise and realising that I hadn't done a list item at 11.30pm and wasn't about to start at that time of night.  Apologies, and today I have done two to catch up (I know, I know, I still haven't caught up from pre-Christmas illness, but I'll get there!).

Our house + curtains has always been a thorny subject.  We negotiated long and hard during the contract period in order to retain the fixtures and fittings, including the curtains.  Unfortunately, we hadn't really looked at them during our initial viewing and when we moved in we realised that heavy cream brocade, mixed with tassels, bucketfuls of voile, and curtains which had been designed so they didn't close (?!) didn't really marry with our tastes.  We put up with them for the time being, and a couple of years later, we decided to be responsible adults and get a kitten.

Poppy had probably been dropped on her head as a kitten, she was loveable, and loving, and funny, and did all kinds of tricks, but she was also certifiably insane.  Within a couple of months, she had ripped all the curtains down, necessitated the removal of the delightfully-draped voile (twisted around the curtain poles, from whence I had to rescue an upside-down crying Poppy, frantically clinging on for dear life), broken all of our nicest Things, and we had given up trying to maintain any semblance of Having Things On Shelves.

Poppy owned us for 3 years, at which point (on Boxing Day) we were devastated when she died from a blood clot.  Just before she died, we'd adopted my old cat Chokki from home, as my parents were moving house and the process was upsetting her.  I was 8 years old and present at the birth of Chokki, and it was lovely that she came to live with us for her last year.  Slow and arthritic, she stood no chance of getting onto the sofa, let alone going anywhere near curtains, so we gradually replaced all the plastic curtain tracks with nice shiny poles, and started being warm again.  Chokki got older and slower over the following year, was sporadically hobbled with crippling pains the vets could never find the cause of, and in the end it got too much for all of us to bear.  She was 4 months shy of 20 years old when she died.

Tilly and Maeby came to live with us just a couple of months before I found out I was pregnant, and much though I love them, I think I would rather have a baby with no cats.  Not only does he torment them by grabbing and yanking handfuls of their fur, but there's all the litter, and cat food, and they won't wipe their feet when they come in, and Maeby still forgets where the litter tray is sometimes.  But they're here to stay, and they followed happily in Poppy's pawprints by pulling down the lounge curtains not long after they'd moved in.  They actually managed to go one better than her, by pulling one of the curtain rail brackets out of the wall (and I'm sure this had nothing to do with me using the wrong pluggy things when I put it up).

I figure that now they're older and wiser (ha!), and are allowed to expend their energy by chasing each other around outside, that curtains might be safe once more.  Plus it is so damn cold that I'd do anything to help retain the heat a little more.

This evening I have tugged those dastardly wall plugs out, replaced them with Proper Ones, and screwed the bracket thing back in.  It made my arms ache and Maeby hid under a blanket.  Maeby is Special.

I thought you'd rather see some pictures of cats than pictures of a curtain rail, so here you are. 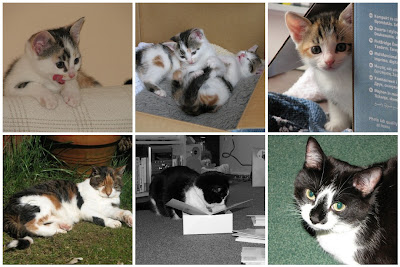 I'm glad that this post is mostly about your gorgeous cats, rather than the actual reality of fixing the curtain rail in the lounge - it makes a great read! :) And those pics are completely adorable. I too now love your cats. Both living and remembered. :)