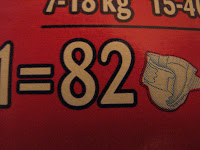 We're all exhausted today after a very poorly baby didn't go to bed until well after midnight. I rang NHS Direct while he was having his tea, as his breathing was very raspy and gurgly, and I was getting concerned. The lovely nurse suggested we sat in the bathroom with him with the shower running, so the steam could loosen his chest a bit. Neither of us could bear the thought of wasting all that water so we took it in turns to have showers while the other one tried to entertain J-cub in the 3-foot-square available floor space - not an easy task. The nurse also suggested we raise the head of his cot, but as he frequently changes which end his head is at during the night, that didn't really work. After 3 hours of us taking it in turns to go up and down the stairs, cuddling, rocking, and bouncing him, all to no avail, we brought him back downstairs again.
The one suggestion we hadn't taken was to leave a window a little open - with minus 7 degree temperatures outside I was really reluctant to do that. With him downstairs, we opened the window of the nursery and shut the door, and within 2 minutes the temperature had dropped from 18 to 12 degrees. I left the window on the latch then, and let the room warm back up to 16 degrees. It seemed to do the trick though, as when I eventually took him back to his cool but full-of-fresh-air room, he dropped straight off and slept until 7.30am.
The upshot is that we don't have any energy left, after the 4 hours of screaming. I can't imagine doing anything energetic, so sat on the floor this morning and wrote J-cub's thank you cards for all his lovely Christmas presents. We took photos of him with each of his Christmas presents, then got cards made up by Truprint. They are lovely, you can put 3 photos on the inside as well as one on the front. They were expensive, but with all our recent illnesses I knew that if I was to handmake them, the recipients probably wouldn't get them for another month.
Now they're all done, and ready to nip round to the postbox when either of us can muster the energy to get dressed.
Cards: 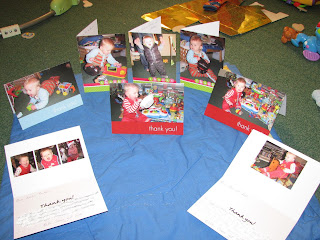 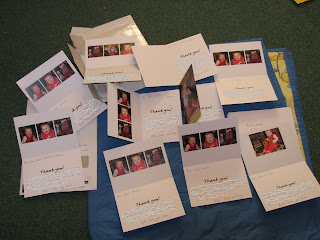 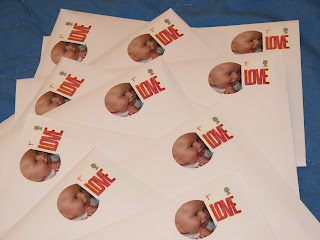 Wow, those Truprint cards are a great idea, I bet the recipients will LOVE them! I assume you just uploaded the digital pictures online, and then they took it from there? I shall have to look into that :)

Sounds like you guys had a difficult night, hope you can make up for it tonight. And well done for completing a list task despite feeling shite!
:)

Yes you upload the pictures, then there are loads of different card templates, you pick a template for the front, and inside, and the back. You can type whatever you like too, we just put "Thank you!" and left the rest blank to handwrite messages. As I said they're not cheap but so lovely.

I didn't know you could get stamps like that! Fab!!